Cogs in the Machine of Empire: A journey through Shigeru’s pictorial imagination 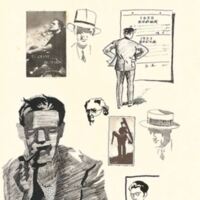 This online exhibition features the work of ‘Shigeru’, one of the legions of Japanese who worked as civilians in lands that formed part of the Japanese Empire in the period 1868-1947 [1]. The rich imagery of his carnet croquis [2], or commonplace book, filled with pen-and-ink drawings on which this exhibition selectively draws, depicts the ambivalences of expatriate life, giving an unusual perspective on Japanese imperialism in contrast to the almost ubiquitous military and official records available.

Although remaining enigmatic, Nakabori Shigeru was, in all probability, one of the thousands of Japanese civilians who heeded the call to populate and, in some cases to ‘civilize’, the disparate and growing Empire, which by the time that the sketchbook was completed in late 1932/early 1933, included Formosa (Taiwan), Chōsen (Korea), Manchukuo (Manchuria), and parts of Northern China.

Shigeru has proved elusive to the usual enquiries, but it is apparent that he worked in the mail-order section of Minakai department store in Seoul, Korea. The now-defunct Japanese-owned department store founded in 1905, was unusual in having its main presence in Korea, with the flagship branch in the nation’s capital. The history of this store is itself worthy of study, especially in the context of cultural-commercial imperial control, and as a means of spreading Japanese cultural influence to local elites.

Shigeru’s age, family background, and fate may not be known, but he left a pictorial record that powerfully records his attempt to visually negotiate and mediate his experience. A diary in pictures. One suspects, though it is only a suspicion, that that he was a trained commercial artist. There can be no doubt, however, that he was highly competent and accomplished, leaning towards the graphic end of the visual arts at a time when it was burgeoning back in Japan; with artists such as Sugiura Hisui (1876-1965) and Hatsuyama Shigeru (1897-1973) leading the way. All the images in the substantial portfolio are executed in pen-and-ink, except the occasional mixed-media piece which incorporate cut outs from magazines and newspapers. Assuming a production span of no longer than a year, all the evidence suggests that it was produced between late 1932 and early 1933, a key period in the expansion of the Japanese Empire, when a decade of economic, political, and cultural expansion metastasized into nationalistic and military conviction, resulting in the appalling events which characterised the lead up to WWII.

It is probable that Shigeru was responsible for designing and producing the illustrated catalogues for the mail-order section of the store, an assertion strongly supported by his particular focus on page design elements such as illustrated headings and floral motifs, as well as on products. The whole portfolio includes both derivative elements as well as original designs. Shigeru himself distinguishes between his own artistic compositions which are signed ‘S’, ‘Shigeru’ or stamped in red, and those that are based on other sources which are unsigned.

The contents of the portfolio are wide-ranging, but give an intimate portrait of Shigeru’s lived experience in Chōsen, as Korea was then known. The varied artist vectors through an articulation of his own experience, his creative inspiration oscillating between fascination with the West on the one hand with its seductive modernity and culture, and on the other, dwelling on symbols of traditional Japanese family life and its cultural calendar. The tension is a familiar one, though perhaps a relatively late articulation of Japan’s confused and hybridised literary and artistic output in the period roughly between the Washington Conference in 1921 and its overt change of direction following the ‘Manchuria Incident’ in 1931. There is complete blindness on Chōsen, exhibiting the hyperopic tendency which characterises much imperial discourse the world over. It is almost as if he is not present at all in Korea, only his name and address on the back of the carnet croquis confirm it. Shigeru’s output provides an interesting contrast with the line drawings of Elizabeth Keith (1887-1956), for example, which emphasize the importance of place and interaction with her immediate surroundings [3].

Although varied in topic, Shigeru’s style is design-oriented and graphic, with strong Art Deco influences, and a noticeable nod to French illustrator George Barbier (1882-1932), who was popular in Japan in this period. The subject matter ranges widely from film posters (five), to small vignettes and design motifs, and it is an open question whether the original compositions were produced for their own sake, or made their way to publications now lost to history. It is quite possible that the mixed-media poster design advertising Greta Garbo in Matta Hari was used in newspaper advertising, though this remains conjecture. The historical commentary supporting this exhibition helps to contextualise such images, allowing the viewer to decide for themselves. Another example of creative borrowing, notably unsigned, is a rendering of Jiggs, the central character from American comic strip Bringing Up Father, by George McManus (1884-1954). Once again, it is unclear whether this is simply a fair copy, or reimaged by Shigeru [4], but it says something of his cultural reach.

The Shigeru carnet croquis comprises loose sketch-book pages which are unlikely to be in the order of their production, the sequence of which is now sadly lost. While each page is clearly ‘themed’ by Shigeru, in this online exhibition, pages have been grouped together for interpretive purposes and sometimes extracted, though multiple images on pages have not generally been ‘mixed and matched’ unless stated. Copyright for all images is retained by the Shadowlands Archive, and reproduction without permission is strictly prohibited.

Acknowledgement: I am exceedingly grateful to Professor Aiko Watanabe, Waseda University, for translating the Japanese present in some of the images. However, any mistakes are entirely my own.

[1] Produced in association with the Competing Imperialisms Research Network (CIRN), principal researcher Aglaia De Angeli, and hosted by the University of Belfast.

[4] Throughout the early twentieth century, characters from America comics were routinely appropriated, some officially, many clandestinely.