Sporting prowess has long been an established way to produce fit, strong, competitive and disciplined young men, ideal for populating and more importantly running Empires, but sporting success has also been used at the international level to validate political systems and support geopolitics. Famously, the Berlin Olympics in 1936 were used by the National Socialists to try and showcase so-called ‘Aryan supremacy’. In Britain, by the late nineteenth century, sporting acumen was an essential component of public-school education in places like Harrow, Rugby and Eton, where a paramilitary atmosphere prevailed. Underlying Shigeru’s various depictions of sporting activities seen in Images 9-11 was Japan’s participation in the Summer Olympics of 1932, held in Los Angles, just a few months before Shigeru’s pictures.  Japan had sent the second largest delegation to the games, winning some 18 medals, including seven golds. Image 9 shows vignettes of various sports executed in different illustrative styles. Notably, in the bottom right corner there is an image of the Japanese flag being raised, making this connection explicit: the presence of seagulls darkly suggestive of staking a territorial claim. Image 10 encapsulates and emphasizes the physical competition and martial contest between two rugby players, while below, a baseball referee signals a strikeout, perhaps alluding to the necessity of obedience to authority and discipline. Women are entirely absent in these images though abundant elsewhere in the portfolio. 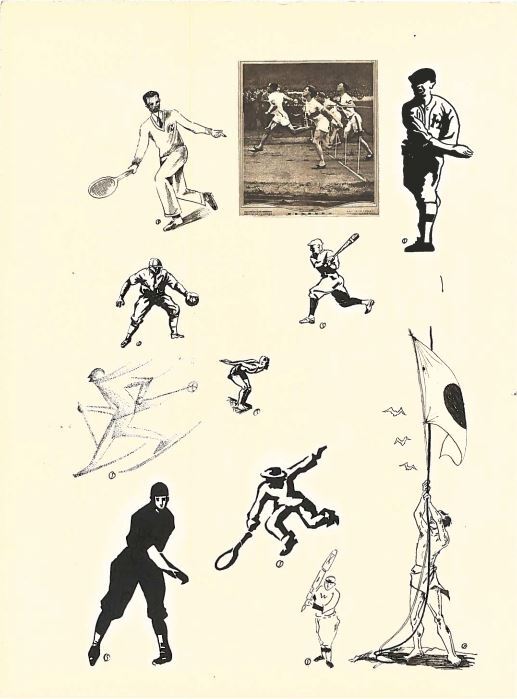 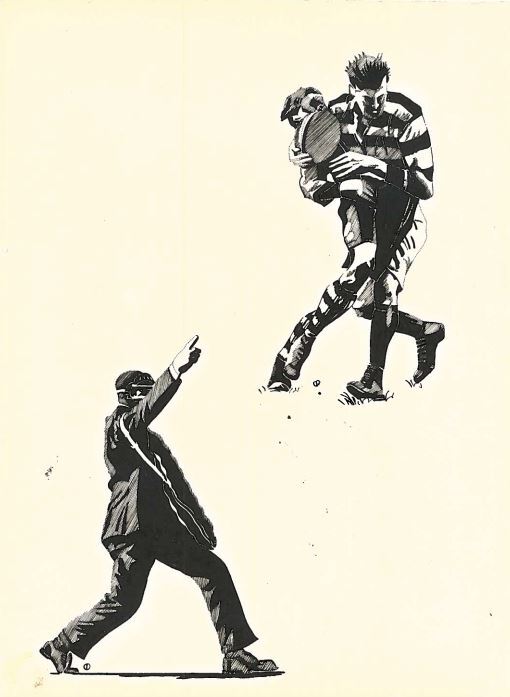 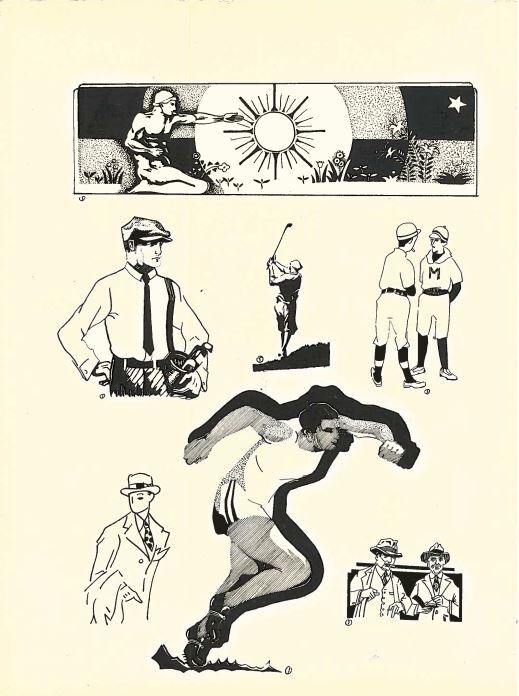 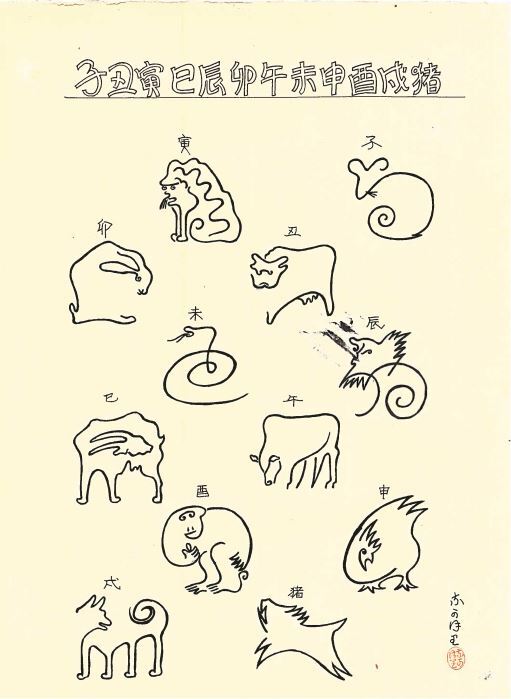 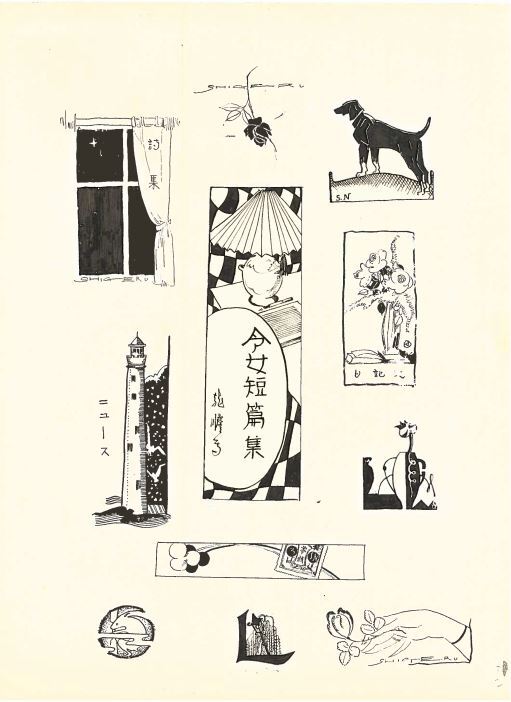 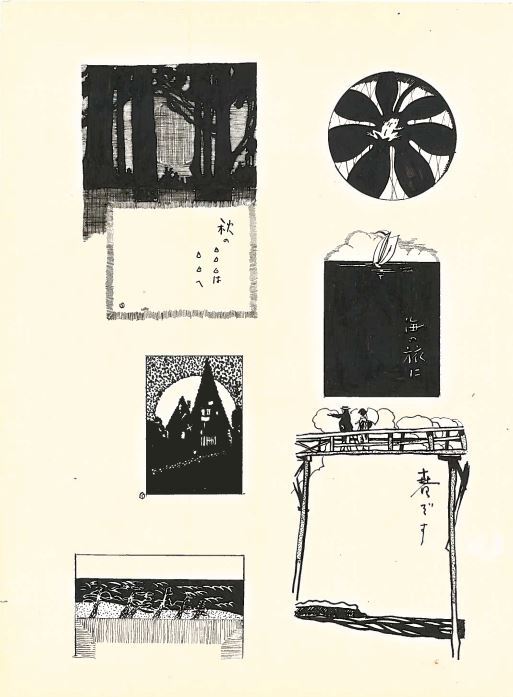 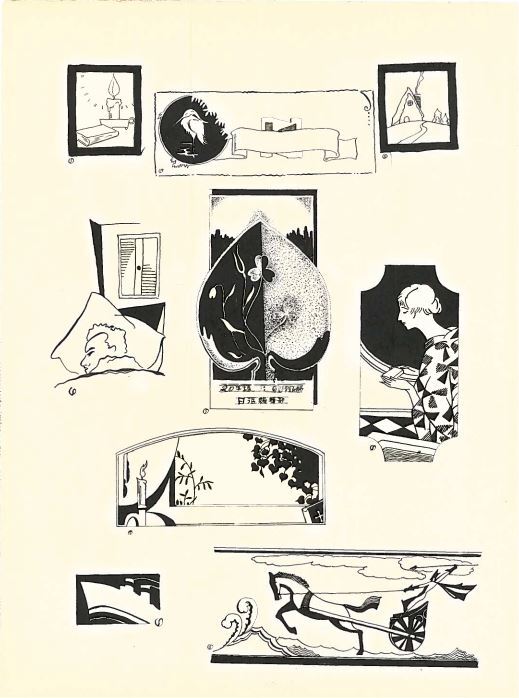 Many of Shigeru’s illustrations are small vignettes that emphasize the act of writing, or form decorative borders with blank spaces. No doubt they were illustrative devices for his company’s catalogues, but may also have met the needs of the wider magazine market which flourished during the period. Images 13 and 14 comprise such themes. Notable are the lighthouse reading ‘news’ [ニュース], and the image of some writing on a desk, interestingly titled ‘Short Stories of a Lady’, the author’s name unintelligible. Although parts of Shigeru’s portfolio are very masculine, as we have seen with the sporting section, and gender associations are broadly ‘of their time’, many of Shigeru’s illustrations feature women prominently. Perhaps this is unsurprising in a period when the atarashii onna [‘new woman’] was making great social and political strides, supported by a burgeoning market for women’s magazines. Over 200 magazines had been inaugurated by 1930 [11], with titles such as Fujin Gahō founded in 1905, Seito (f. 1911) and Fujin kōron (f. 1916) leading the charge. Next to this is a tableau featuring a vase of flowers and an open book titled ‘Diary’ [日記], and in the top left, a star twinkles through an open window with the description, ‘Poems’. In image 14, various bookplates, labels, or letter headings associated with travel are presented with considerable accomplishment.

Image 15 is comprised entirely of graphic art motifs. At the centre, a heart-shaped leaf plays with the polarities of white and black, the writing ‘20 letter story, 60 lines, by Nikkatsu editorial department’ [20字話：60行●● 日活編輯部], perhaps gives a further clue as to where Shigeru found another outlet for his creativity. The Nikkatsu referred to is likely Japan’s oldest major film production company in Japan.