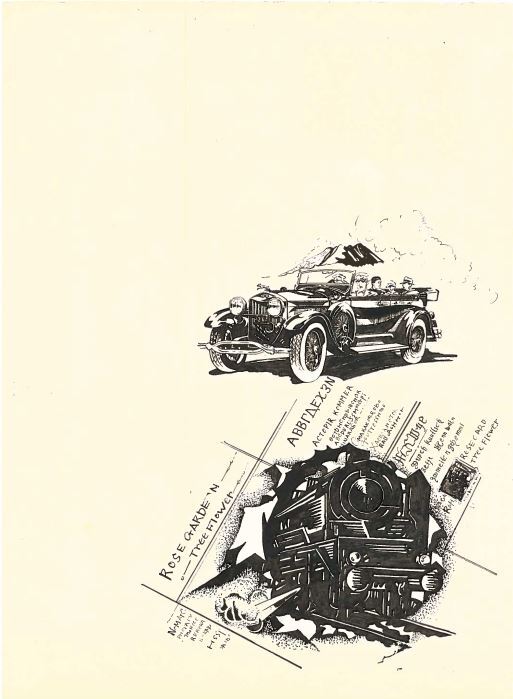 Some pages in Shigeru's carnet croquis exhibit illustrations focusing on transport and travel; images symbolic of modernity and crucial for realising imperial ambitions. Many picture postcards and photographic guidebooks proclaimed the fruits of the Empire's geographic expansion. These visualities translated Japan’s growing Empire to people back home, bringing the Empire to the streets of Tokyo, much as public parks and zoos had allowed the British public to participate in Empire building in Victorian Britain. Two images stand out, pictured on the same page of the carnet croquis. At the top, an expensive chauffeured touring car –a Jaguar– powers forward, its wealthy occupants enjoying the outing. In the background Mount Fuji emerges from the clouds.  In 1930s Japan, much like in America, the wealthier classes began to explore the great outdoors. In the second image, undoubtedly the star of the portfolio, a train, bursts through the paper, as though emerging from a tunnel. Dynamic, modern, and thrilling. The image is surrounded by Russian, German, and English words -the main regional players- metaphorically torn asunder by the express locomotive which represents Japan. A perfect miniature portmanteau in the larger portmanteau of Shigeru’s carnet croquis – a record of accumulated images which though lacking the heft of explicit government propaganda, nonetheless played a crucial role in laying the foundation for the moral acquiescence which allowed the colonial narrative to gain traction, and eventually overwhelm.

← Section 4: Work and the Home (pen-and-ink)
Section 5: Locomotion and Travel