Section 4: Work and the Home (pen-and-ink) 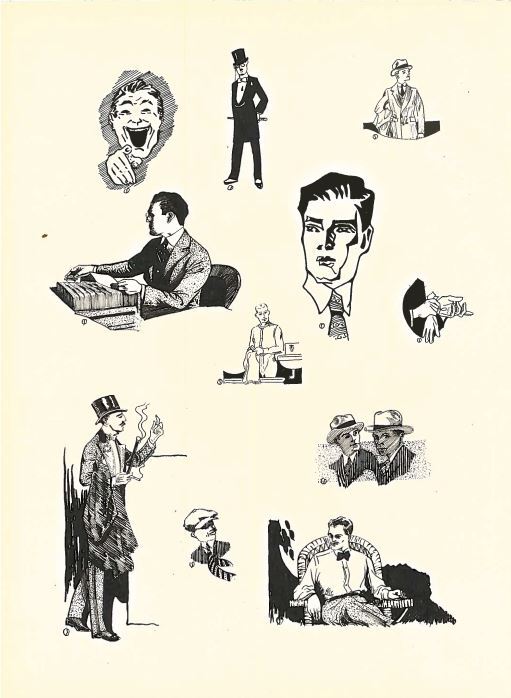 It is well recognised that an important means of expressing identity is what you wear, what might be called your sartorial display. During most of Taisho Japan, clothing was the most obvious indicator not only of social status and age, but of disposition towards a certain view of modernity or tradition; towards western ideas more generally, and the value of Japanese culture. Shigeru’s work explores this tension marvellously well. In image 16 he presents 11 male vignettes that rotate around the notion of the gentleman, the dandy, and the masculine. There is a tongue-in-cheek quality to what passably qualifies as a series of caricatures in the Bertie Wooster mode. At the top left a laughing face with finger raised, points directly at the viewer. It seems to be mocking the foppery of Western dress and the affected attitude of the wearer, which was much-imitated, but also much-criticised in Japan. Several other illustrations present men in evening wear, their posture and faces conveying arrogance and conceit. One man stands with his evening jacket under his arm, nose raised aloft with an air of boredom and disdain, while another peers queerly through a monocle while clutching his cane. A man in black tie beckons with an insouciant extended finger. A close-up of white evening gloves being removed furthers the impression of Shigeru’s disapproval, yet fascination. Juxtaposed to this are working men, in shirt and tie, at work. Several other images in the portfolio depict the office clerk hard at work, perhaps a reflection of Shigeru himself. Toby Slade’s book, Japanese Fashion: A Cultural History (2009), explores many of the ambivalences and contradictions inherit in this interplay between Western and traditional attire in Japan, which both embraced and condemned almost in the same breath. 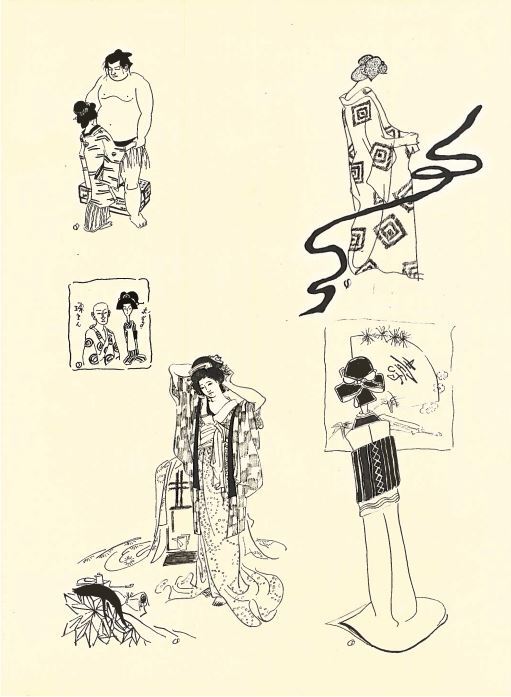 Perhaps closest to Shigeru’s day job is a sequence of four images featuring Japanese women wearing kimonos, at least one of which is clearly a geisha. The oft-cited traditional role of Japanese women is presented here, with its central tenets of domesticity and service. In the first image, a woman kneels before a sumo wrestler, apparently adjusting his belt and dressing him. The next image, infused with palpable eroticism, shows a woman from behind, removing (or fastening) her half-open kimono, her obi (belt), already removed, slivers serpent-like -phallic- right across the image, insistent and potent. Below a geisha, adjusts her hair having just completed the tea ceremony, its paraphernalia shown in both the foreground and background.  In the final image, a women wearing kimono can be seen reading a notice announcing an ‘auspicious occasion’ [壽]. Combined, the images can be read as constituting traditional ideals of womanhood: to dress and help prepare men for public life, to provide pleasure and entertainment, and to host and organise. The final ingredient, ‘motherhood’ is powerfully displayed in another image. 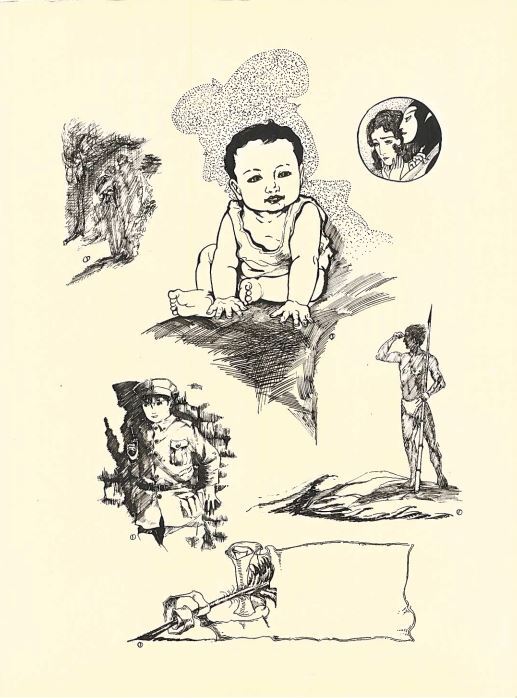 The complex relationship between Japanese mothers and their children, especially sons, in the period leading up to WWII is well-known. Shigeru represents this powerfully in the form of a picture of a baby boy (Image 21), behind which the stippled silhouette of a young woman doubles as a shadow, the baby sitting on the ground which is cross hatched and shaded in the form of female genitalia. Here the reproductive cycle is acknowledged. Either side of this image are images of courting couples, to the left a couple disappear in an impressionistic mist, on the right a more sinister jester-like character whispers sweet nothings in a young woman’s ear, primed to take advantage.