Japan’s early and lasting aesthetic contributions to the development of cinematography and the cinematic arts more generally have been the subject of many studies, to say nothing of its contribution to the development of camera technology. It is in film that the interface between West and East is at its most dynamic, as modernity meets and seeks to incorporate traditional story-telling forms including noh drama, while emphasizing its forward-looking potential. Film encapsulates Japan’s determination to modernize, but to pursue this modernisation in a way respectful of its cultural uniqueness, sometimes derogatively referred to as Japanese exceptionalism. Like many of his generation, Shigeru was apparently fascinated and delighted by the potential of film, both Western and Japanese, and the emerging cult of celebrity which attended expanding audiences and technical innovation. The carnet croquis reflects these preoccupations, containing four film posters and a collage, something equivalent to an adolescence pin-up wall, featuring Japanese silver screen stars. Although in some senses simplistic, the posters emit an unmistakable energy: Shigeru not only presents, but at times endorses the films, reflecting the eagerness which accompanied each release: ‘What a joy we can see Garbo! This day has come!’ Shigeru proclaims in his poster for Mata Hari (1931). The typography is at times almost too exuberant, at others restrained, but never subordinate to the images, which incorporate repurposed newspaper and magazine cuttings. A good contemporary example of a mixed media poster in which typography similarly holds its own is for the film Ojosan [Young Miss] directed by Ozu Yasujirō and released in 1930 [5]. Shigeru’s film posters span genres and nationalities, from home-produced pink movies to French and American mainstream. In Image 1, which advertises several films, foreign and Japanese movies coalesce comfortably.

The four films advertised are: While Paris Sleeps, [巴里の丑満時]; The History of Genroku [風雲元禄史]; The Golden Calf; The Well-known Rogue of Kamata [蒲田名物ヨタモノ]

While Paris Sleeps, released in 1932, was a pre-code American film directed by Allan Dwan. It tells the exciting story of Frenchman and convicted murderer, Jacques Costaud, who escapes from a penal colony and attempts to save his daughter from a life of prostitution in Paris. It has strong echoes of both Victor Hugo’s Les Misérables (1862) and Alexandre Dumas’ Count of Monte Cristo (1844-1846). 風雲元禄史 [The History of Genroku] starred the Japanese actor, Jun Tanizaki, and appears to have been a historical drama set in the Genroku period (1688-1704), though details are scarce. The Golden Calf, released in 1930 was another pre-code American film written by Marion Orth and Harold R. Atteridge. The early ‘Rom-Com’ tells the story of a commercial illustrator seeking the perfect female leg to help him illustrate a product for a hosiery company. His drab secretary, secretly in love with him, transforms herself and deceives him, becoming the leg model. They eventually fall in love. Shigeru bowdlerises this with the titillating, but nonetheless accurate description, ‘leg-line, priceless’ [‘脚線價千金’]. The film has strong echoes of Bernard Shaw’s stage play Pygmalion (1913). The fourth film, untraced, features a Japanese film which translates as, The Well-known Rogue of Kamata. The film is, the poster informs us, screened at Taishokan (cinema/theatre), in the Asakusa entertainment district of Tokyo. The four titles in the poster appear love-orientated and relatively light-hearted fare. Despite this, dark clouds were gathering over Japanese cinematography, as noted by Peter B. High in The Imperial Screen: Japanese Film culture in the Fifteen Years’ War, 1931-1945, which discusses how the film industry was quickly hijacked to become a powerful tool in Japan’s relentless propaganda war. 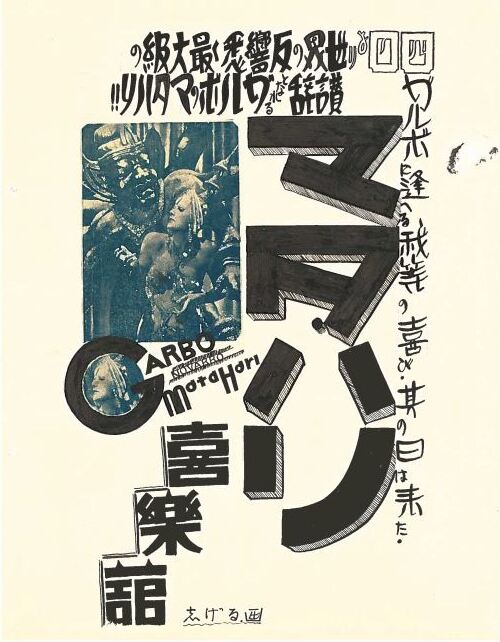 Shigeru’s second poster advertises a single film, the American-produced Mata Hari (1931), directed by George Fitzmaurice. Based on the story of the exotic dancer and German Spy, Mata Hari, it was Greta Garbo’s most successful film commercially. The poster incorporates a screen still, with both Japanese and English titles, and is signed by Shigeru who conveys great excitement and anticipation, for what was, even in its day, a somewhat controversial film. The full cut is still unavailable today.

In his article, ‘The Representation of Enemies in Japanese War-Time Films’, [6] Tae Woon Kang discusses how films such as Mata Hari and Dishonoured exposed Japanese audiences to the idea of the femme fatale for the first time, though he asserts that this did not necessarily result in imitative film-making. Somewhat later, films such as Kanchowa Imada Shisezu [The Spy Is Still Alive], largely rejected this trope. 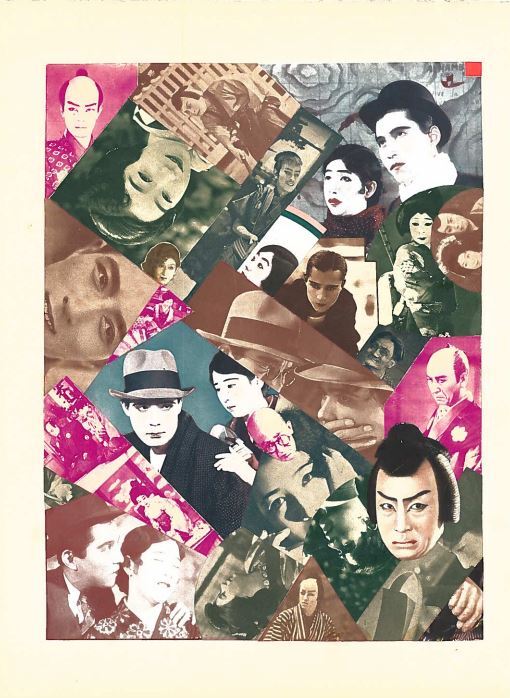 This collage made up of clippings of Japanese screen stars taken from magazines and newspapers of the period has been skilfully arranged by Shigeru to create the effect of a fragmented mirror; which while cementing their pin-up status, hints at the fragility of their stardom. On another level it also reinforces the particular mirror which Shigeru holds up to himself, his cultural and physical lights, and those with whom he identifies. 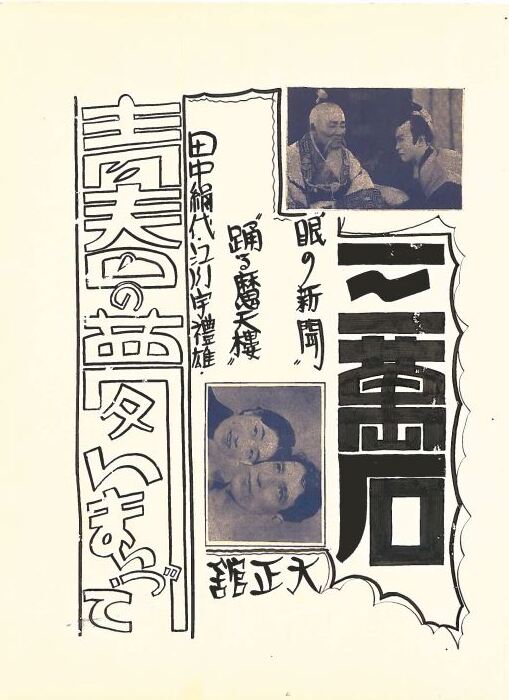 Image four returns to the multiple film advertisement. It is less accomplished than the others, perhaps incomplete, and contains the compositional error of the photograph running on a different axis than the textual description. The third film 青春の夢いまいづこ[Where Now are the Dreams of Youth?] is a silent film by Ozu Yasujirō first released at the Teikokukan in 1932, a coming-of-age drama featuring a student love triangle. The cinema advertised here is the Taishokan. 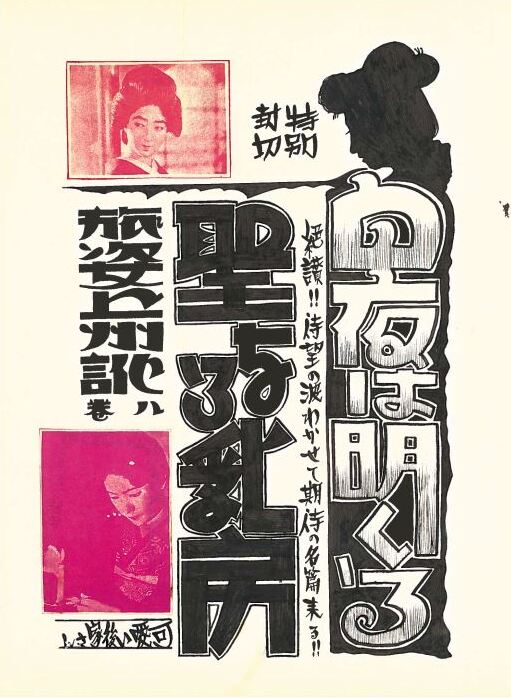 The final film poster by Shigeru is perhaps the most accomplished, and full of erotic potential. The coquettish look of the actress taken from a screen still invites the viewer to engage with the textual description, and the silhouette of a young kimono-clad woman, contrasting with the pink hue of the photographs, make the genre of the film unmistakeable. This silent movie, Dawn After the Midnight Sun [白夜は明くる] was released on the 9 September, 1932 and directed by Hiroshi Shimizu. If the images are supposed to excite, the description adds with further titillation, ‘Sacred breasts’ [聖なる乳房], ‘A pretty widow’ [可愛い後家さん ], ‘special release’ [特別封切], and ‘Highly praised, long awaited, and now the masterpiece has come!’ [絶讃!! 待望の波わかせて期待の名篇来る!!].

[5] The film itself is, like many of Ozu Yasujirō’s films, now lost.

[6] Tae Woon Kang, ‘The Representation of Enemies in Japanese War-Time Films’, The Korean Journal of Japanology, 105:257.